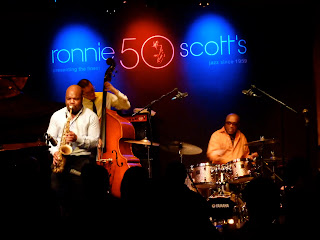 For those of you that don't know, I just got back from a 5 week tour with the great Roy Haynes! It's been a while since I've been out for such a long tour, but I have to say I had a great time! In those 5 weeks we traveled to Finland, Germany, Spain, Italy, France, the UK, Sweden, Copenhagen, Norway, and Denmark.

I must say Mr. Haynes is Amazing! He had way more energy than I did the whole tour. There were a few one nighters in Spain that were basically late night gigs and early lobby calls. Roy would be perfectly fine every morning, literally whistling as he came down stairs! Meanwhile the rest of us would barely be able to move. He also has a great sense of humor, which really came out when we got to London. While at Ronnie Scott's, Roy tested out some of his jokes on the crowd during one of the sets and had the audience as well as the band rolling..

The downside of the tour was that both of my horns started acting up. This could have been due to the fact that I was playing hard almost every day, or the fact that I was flying almost everyday and the horns were moving around a lot. Initially it was just the soprano, which I thought was leaking, so I took it to a shop called "Sax Machine" in Paris. They fixed it up, but two days later, before a gig in Brighton, I drop it.. So I have to take it to a shop in London. And they fix it up again.. So I'm thinking everything's cool and while I'm playing my alto that night at Ronnie's, the High D spring breaks... So now I have to go get my alto fixed! LOL! It was a mess to say the least. I think I need to get my repair chops up and start bringing some emergency tools and supplies with me for the next trip!

Overall, we had a great tour. I met many new friends and got to see some old friends I hadn't seen in ages. I have to say I've grown accustomed to London, even though the Pound is killing the Dollar. London is a pretty cool place.. Copenhagen was pretty cool too. I didn't get to see too much of it, but one thing that caught my eye was the fact that so many people over there ride bikes. Sometimes it looked like more people rode bikes than drove cars. Unfortunately, most of those people didn't wear helmets... Last but not least is Paris! Unfortunately, after having been there maybe 7 or 8 times I think I've come to the conclusion that I may not like French food... But I really enjoy Paris and hope I get to find more places to hang outside of the jazz clubs I usually frequent out there... What's next? My trio will be performing tomorrow night at the Bar Next Door and then I'm off to Moscow with the Vitaly Golanev Group this weekend!
Posted by jaleel at 7:44 PM

Wow, sounds like a great but crazy time! Hope the horns continue to work, and hope the tour continues it's awesomeness. Can't wait to see you when you come back stateside.

Thanks for the update Jaleel! I enjoy seeing your posts come up on my RSS feed, keep em' coming!